The Other Arrhythmia of Consequence - VPCs

In the Irish Wolfhound, only atrial fibrillation predicts cardiomyopathy, but there is another arrhythmia called VPCs that predicts a higher incidence of sudden death.

Normally the atria (top or filling chambers of the heart) initiate the heartbeat and tell the ventricles (pumping chambers) to contract. When the ventricle fires early without a signal from the atria it is called a ventricular premature contraction or VPC.

Normal EKG of an Irish Wolfhound 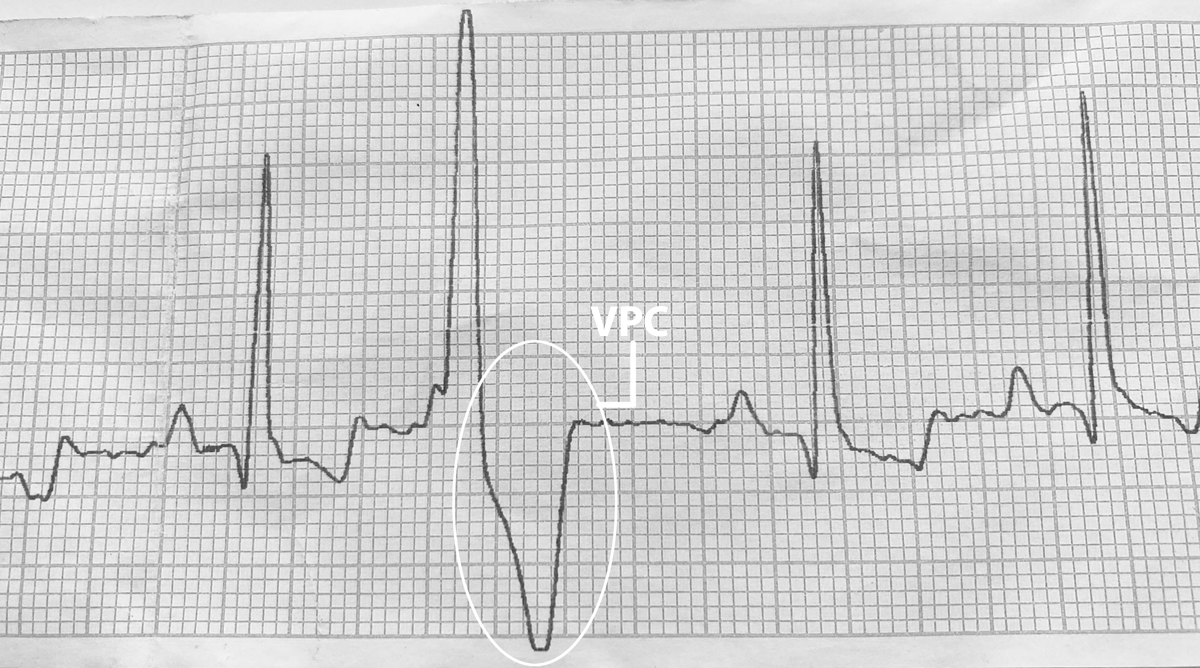 EKG of an Irish Wolfhound Showing Ventricular Tachycardia (VTach). When VPCs occur as the main beats it is called ventricular tachycardia. The holter monitor is often used to diagnose this. It is a more dangerous problem as it can lead to ventricular fibrillation with collapse and death.

Single VPCs do not cause symptoms. When there are multiple abnormal beats from the ventricle it can result in ventricular tachycardia or ventricular fibrillation which can lead to collapse and even death.

How Common Are VPCs in the Irish Wolfhound?

VPCs are a sporadic arrhythmia so the incidence is not certain. Most estimates come from screening clinics of asymptomatic hounds of various ages. The incidence has been reported as 2.6% in Germany, 4% in UK, 2.6% in the Lifetime Cardiac Study and 3.2% thus far in the Life Cycle II Study’s data collection.

What do we know?

In 65 asymptomatic hounds with VPCs on screening EKG, 26.1% DID NOT have VPCs on subsequent EKGs. The initial EKG is not able to predict which hounds have benign and transient VPCs and which hounds are at risk.

In some breeds, such as the boxer and Doberman, VPCs often are a precursor to DCM.

Date of death data showed mean age at death for hounds with sporadic VPCs was 8.2 years. VPCs are not a predictor of early death.

Dr K.E. Schmitt examined the hypothesis that VPCs were benign in the IW. Of 19 asymptomatic hounds, 7 had worrisome arrhythmia requiring treatment when holter monitors were done.

Cause of death data revealed a higher incidence of sudden death (9.6%) in the population with VPCs on screening EKG than in the general population (3.6%). This plus the high incidence of dangerous arrhythmia seen on holter monitors tells us VPCs are not always a benign arrhythmia in the asymptomatic hound.

Unlike atrial fibrillation, the incidence of VPCs does not seem to increase with age or to be more common in either sex. This continues to be difficult to document in a sporadic arrhythmia.

In older hounds with previously normal EKGs, the new appearance of VPCs often predicted  a malignancy that was not yet symptomatic. Osteosarcoma or lymphoma were the most common and it is felt the inflammatory state leads to irritability of the heart and VPCs.

Yearly screening EKGs are recommended for all IWs over 2 years of age not only to rule out atrial fibrillation but also to screen for VPCs.

There is a high incidence of dangerous ventricular arrhythmias and increased incidence of sudden death in this population and no other test tells if the hound is in danger. The holter monitor is essentially an EKG worn for 24 hours. It is now much easier for a hound to wear but does require small areas of hair removal.

An echo can be done if the owner wishes but has not been helpful for this cardiac problem.

It is hoped in asymptomatic IWs with VPCs and a benign holter monitor, this arrhythmia is not dangerous to the hound.

If your hound has VPCs on a screening EKG please consider participating in this study. Blood work, yearly echocardiogram and holter monitor are subsidized by the Irish Wolfhound Foundation for study participants. For more information please see the IWF website.