Signs and Symptoms of Bloat in Irish Wolfhounds

We've all heard about bloat and how dangerous it is. We've probably all heard the symptoms to look for - but do we understand what, EXACTLY, we are looking for? What does restless REALLY mean? Could YOU recognize the signs in your dog? If you thought your dog was bloating, would you know what to do? The causes of bloat are as mysterious. Do you understand the various and often conflicting information regarding it?

Bloat (gastric dilation) is a potentially fatal occurrence, often linked with torsion (volvulus). The stomach fills with gas or air, then often flips, twisting on itself. Bloat & torsion are often called GDV (gastric dilation and volvulus). Damage to the stomach can occur in moments. Torsion can involve the stomach only, the spleen only, or both organs. A dog can have torsion which causes bloat, torsion only, bloat which leads to torsion, or bloat alone. Damage to the spleen, kidneys, liver, intestines, and heart are possible, as is death. The odds for an otherwise healthy dog with bloat and torsion can be as low as 30%.

The causes of bloat are not fully understood, but many factors play into its occurrence. Stress is a major factor. As an IW owner, you must be attuned to your dog for his or her personal stress indicators. For example, when Dylan is stressed, he draws his third eyelid over his eyes. The dog may pant excessively, (which also can lead to aerophagia, swallowing air, which could cause bloating) or be excessively clingy. Frequent yawning is also a sign of stress. Knowing what causes stress in your dog, and as much as possible, preventing it, is also critical. Many people believe feeding certain types of foods can lead to an increase risk of bloat (see the Purdue study) = it is generally recommended that you not feed food with citric acid as a preservative. Many people feel that feeding the dog in raised feeders leads to bloat. Many others feel the opposite. Discuss this with your breeder and vet.

Many people feel that feeding dry kibble can lead to bloat; there is some evidence that dogs fed a raw diet are more likely to bloat - however, this may be due to the fact that more large breed dog owners feed raw diets than small breed owners do. Dried beets, beet pulp or beet powder have been proven to cause foaming in the stomach, which can lead to excessive gas build up. A violent illness with vomiting can cause the stomach to begin swinging like a pendulum, leading to torsion, causing bloat. When Limerick bloated, it was secondary to a stomach upset. He began vomiting, which apparently caused the stomach to swing like a pendulum, until it finally flipped all the way over. Eating too much or eating inappropriate things can also cause bloat or torsion. When Dylan bloated, it was because he had overeaten. And, extreme pain (which is stressful) can cause them, too. Older dogs may be more at risk than younger dogs, especially if they have a mass or other illness, but even very young puppies as young as a few weeks can bloat.

It is important to remember that a dog can have either or both... they don't always "come together".

We are all told to watch for panting, restlessness, a distended abdomen and "muddy" gums as danger signs.

However, what exactly IS "restlessness"? Some dogs may lie calmly as long as 20 minutes at a time, before getting up to move to another position. Dylan lay for as long as 1/2 hour before rolling over - he never got up to pace. Many dogs won't lie down, but some find the pressure more comfortable. Some may feel (and display) pain when they move, and therefore be content to lie still. Dylan was happiest lying still (which is why I waited so long to take him to the vets; I mistakenly thought if he was comfortable lying down, he wasn't bloating) - other than panting, the only sign of distress was when he rolled over he would cry.

Many IWs have such large rib cages that their entire stomach is within the ribcage unless he swallowed a basketball, you might not feel any distention. With Limerick, 3 vets examined him and none felt any evidence of bloat, although the x- ray had already showed air in his stomach. The lower abdomen (the soft part we all like to scratch when they roll on their backs) may not show any signs of bloating, excessive firmness or distention. Only an x-ray can accurately diagnose bloat or torsion. On an x-ray, the torsed stomach looks like a "double bubble" - almost like a twisted infinity symbol.

Muddy gums are hard to describe, but once you've seen them, you never forget. Imagine mixing blue (lack of oxygen) with the pretty, healthy pink of your dog's gums that's muddy. When you press on healthy gums, they should go white for a second, then immediately turn pink again - muddy gums remain dark. If you see muddy gums get your dog to the vet IMMEDIATELY!

Contrary to popular belief, bloat alone CAN kill your dog. And bloat alone is common. Your dog can also have torsion, without bloat. And, again, disproving popular theory, your dog may be bloated or even experiencing torsion, and still be burping. When Limerick bloated, he was constantly burping (in the vet's face, in fact)!

Your dog may display other unusual signs, such as repeated retching, but not vomiting, looking at his flanks, side or stomach, biting or chewing at them, or constant pacing. Excessive drooling, or standing in strange postures can also be signals. Some dogs will hold their heads very high, while others drop them as low as they can. Some dogs may lie in positions they never have, or in strange places. I know of one dog who felt best lying on cold concrete while he was bloating. If you notice unusual behavior, it is probably better to go to the vets to check than take a chance with your dog's life.

Normally, in a case of GDV, you have moments - not hours. If you THINK its bloat, it is always safer to get to the vets, and find out it isn't, than to wait and be wrong. I keep simethicone tablets (such as Gas-X) everywhere - in each car, in my purse, & in the "dog bag"... at the first sign of possible bloat, I give the dog 2 pills (275 mg each). I then IMMEDIATELY head for the nearest vet. Talk to your vet about the proper dose and use of simethicone for your dog. When Dylan was ill, I gave him I Gas-X and I Tagamet , before taking him to the vet's. This may have delayed the more severe symptoms, saving his life. But remember, simethicone is not a cure, only a delaying tactic. It may give you enough time to get to help before your dog's situation is critical. DON'T think, however, that it allows you extra time - give it and GO!

There are new methods of "tacking" (gastropexy) the stomach to the abdomen wall to prevent torsion - but don't be misled into thinking this will prevent bloat. A tacked dog can still bloat. Tacking lessens the likelihood of torsion, but does not prevent it. Gastropexy can now be done via 3 small incisions on the dog's side, or via tiny scopes, laparoscopically. Many vets recommend keeping a dog which has been recently "tacked" calm for as long as 6 weeks. Tacking involves drawing stitches from the outer wall of the stomach to the wall of the abdomen. The stitches cause scar tissue to form, which is what actually hold the stomach in place. The stitches eventually dissolve.

After bloat, your vet may check for damage to the liver, spleen, kidneys or heart. Damage to the stomach or other organs is common and may lead to lifelong aftereffects, if your dog survives the initial damage. Arrhythmia is not uncommon after GDV, and can be fatal, but often goes away after a day or so. DIC (disseminated intravascular coagulation) a severe side effect, is also possible. If your dog had surgery, he will probably have a large incision & need to remain calm for a few weeks. When Dylan had GDV and surgery, he was kept at the vet's for a full week, while they did EKGs and made sure he was eating and voiding normally. He finally ate some yogurt and came home. He seemed to be uncomfortable for about 8 weeks afterwards "guarding" his stomach, being unwilling to move fast, climb stairs or sit. Limerick, however, seemed to feel very little discomfort after his surgery, other than when he jumped (forbidden, but still!) off the bed or sofa. He spent 24 hours at the emergency clinic, never had an EKG, and I was advised that I only needed to restrict activity till the stitches dissolved. 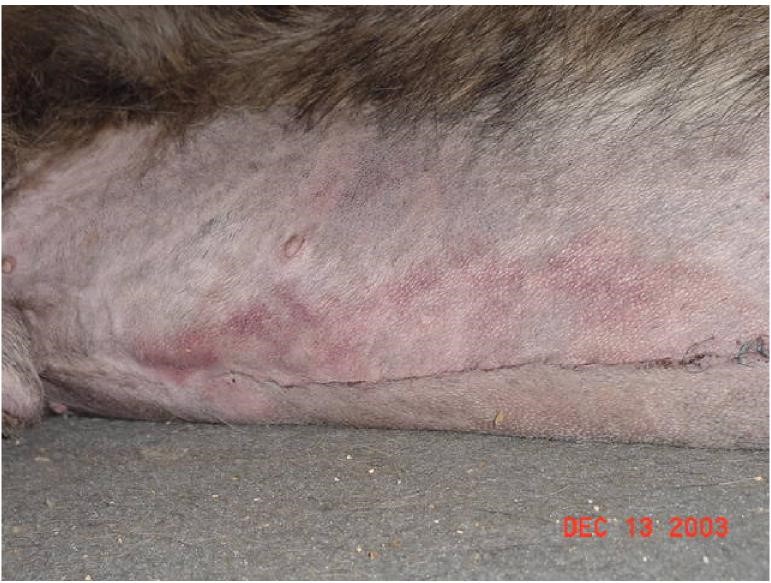 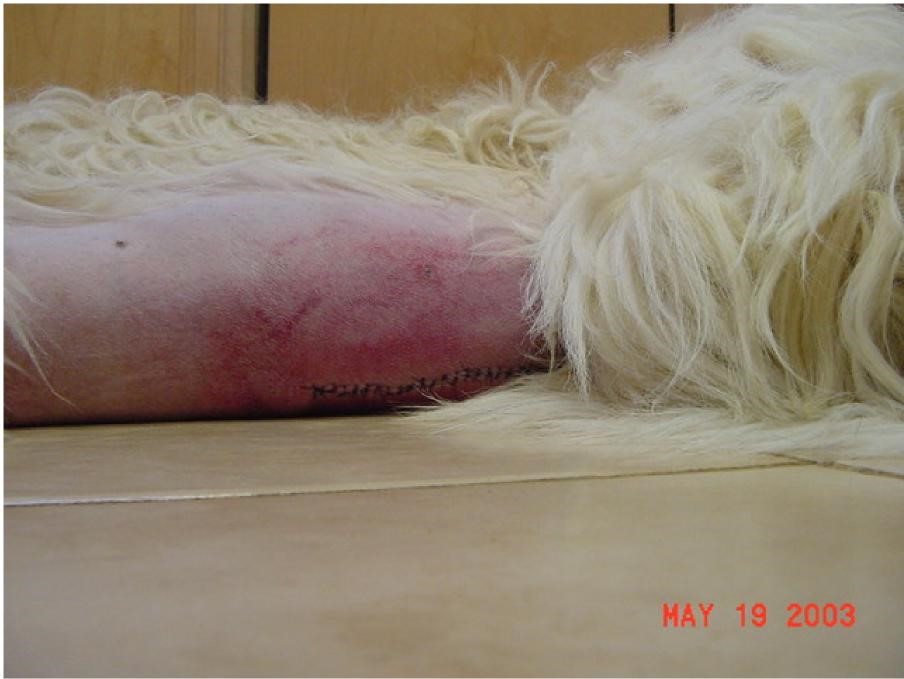 Your dog will have a long incision outside, either stapled or sutured closed. There may be some leaking at first, but it should heal quickly. If there are any unusual occurrences, contact your vet. There may be lots of redness and bruising.

Bloat can be terrifying & dangerous, but with a bit of knowledge and a lot of caution and vigilance, you can hopefully save your dog's life.