The IWCA thanks Dr. Nachreiner and his colleagues for permission to publish their manuscript on our website and in our breed publication. Their generosity in sharing information is very much appreciated, and we hope it will be informative to all IW owners.

Hypothyroidism is the most common endocrine disease in dogs. The thyroid gland controls the speed of metabolism of almost all body cells. When thyroid hormones are subnormal, many different body systems can be affected; so the clinical appearance of the disease can vary. The most common clinical signs include: weight gain, sluggishness, skin and hair coat problems (including hair loss), weakness, cold intolerance, and infertility. Although hypothyroidism is not life threatening, the quality of life is subnormal. Veterinary testing procedures have improved over the past 25 years, and hypothyroidism and its therapy are well understood by most practitioners. Breeders, however, are faced with a dilemma. The disease seldom demonstrates clinical signs before 3 to 5 years of age, well into the showing and breeding years for many dogs. An economical and early detection procedure is needed. Progress is being made toward this objective.

The 1997 AKC Parent Club Survey1 found that breeders are quite concerned about this disease. In fact, it was ranked first, with hip dysplasia and epilepsy close behind. As a result of breeder and veterinary interest, a number of progressive changes have occurred in the past few years. AKC and other groups sponsored an International Symposium on Canine Hypothyroidism2. Participants agreed that breeders should test their dogs for thyroid disease and this test profile should include Total Thyroxine (T4), Thyroid Stimulating Hormone (TSH), Free T4 by Dialysis, and Thyroglobulin Autoantibody (TgAA). The Orthopedic Foundation for Animals (OFA)3 started a Canine Thyroid Registry and has certified a number of regional veterinary laboratories in the US and Canada qualified to perform the thyroid profile for registry purposes. Oxford Laboratories4 began producing a commercially available assay for TgAA so all reagents for the OFA profile are standard among certified laboratories.

About half of canine hypothyroidism has been reported to be associated with autoimmune thyroiditis (positive TgAA).5 The majority of the remaining hypothyroidism is idiopathic (without apparent cause and TgAA negative), while a small fraction is from a pituitary disorder. Recent data from Michigan State University have shown that idiopathic hypothyroidism can be the end stage of autoimmune thyroid disease. Hence, the majority of canine hypothyroidism is the result of autoimmune thyroiditis. This makes testing for the disease marker in breeding dogs important for reducing its incidence. The best current marker for this disease is a positive TgAA test result. This is present when there is active thyroid disease (inflammation). Assuming a single gene disorder and recessive trait, TgAA will be positive only in dogs having both genes for thyroiditis. TgAA will not be positive in the carriers (having only one gene for the trait) and may not be positive early in the life of some dogs that become affected later.

A number of scientific publications have presented data to support the genetic transmission of autoimmune thyroiditis 7,8. Others have reported the familial (occurring among relatives) incidence of the disease 9, 10, 11, 12. In addition to screening breeding animals, the TgAA assay has been useful for disease diagnosis. In June 1998, the Michigan State University Animal Health Diagnostic Laboratory began running the TgAA assay as part of routine thyroid function testing, making it possible to detect autoimmune thyroid disease long before complete thyroid atrophy and clinical hypothyroidism (when clinical signs are present) occurred. Of course, most of the samples were from dogs with at least one clinical sign suggestive of hypothyroidism.

A study done on the first 51,201 laboratory samples that were tested for thyroid disease using the new TgAA test indicated that 7.9% of samples were positive and 4.0% were inconclusive. There were 4045 dogs positive for TgAA and 2809 classified as having idiopathic hypothyroidism. Dogs less than 2 years of age had few (less than 5%) TgAA positive samples (Figure 1); samples from dogs 2 to 6 years of age were positive 9 to 11.5% of the time, while samples from dogs older than 6 were positive less often. It appears that autoimmune thyroid disease occurs earlier in life than idiopathic hypothyroidism, supporting the concept that the idiopathic form may result from the autoimmune disease. Semi-annual thyroid biopsy results from a small group of affected dogs at MSU also support the conclusion that idiopathic hypothyroidism is the end stage of autoimmune thyroid disease.

Another way of looking at these data is that over 50% of TgAA positive samples were from dogs less than or equal to 5 years of age, while it took 8 years to obtain more than 50% of the samples from dogs with idiopathic hypothyroidism (Figure 2). Since idiopathic hypothyroidism appears to be the end stage of autoimmune thyroiditis, the majority of primary hypothyroidism in dogs is most likely a result of the autoimmune disease. An important fact for breeders is that the TgAA test can detect this disease years before clinical siqns of hypothyroidism occur. After 6 years, the TgAA test becomes less relevant, as dogs that were positive can become negative when the thyroid is destroyed, and there is no longer a stimulus for TgAA production. After that time, T4 and TSH become more important indicators of thyroid disease.

As one would expect from a genetically transmitted disease, 16 breeds had significantly higher laboratory prevalence of TgAA compared to the total number of dogs (over-represented) and 27 breeds had a significantly lower prevalence (underrepresented)(Table 1). Some additional breeds also had high or low percent positive, but the number of samples from those breeds may have been too small to achieve statistical significance. As additional samples are analyzed, presumably these additional breeds will become statistically significant as well.

As groups, Herding and Sporting dogs were significantly over-represented for TgAA positive samples while Hounds, Non-Sporting dogs, Terriers, and Toy breeds were under-represented (Figure 3). Within those groups, some breeds were significantly over-represented while others may be under­represented. The Hound group (Table 2) has 3 breeds with over 500 samples, 2 were under-represented (Dachshund and Greyhound) and 1 is over-represented (Beagle). Since a number of publications have shown that the Beagle breed has a genetic component to autoimmune thyroid disease, it is not surprising that they are on the over-represented list. Some of the sight-hound breeds, such as the Afghan, have been implicated to have a high incidence of hypothyroidism, but the disease may have been over-diagnosed in those breeds because of the lower normal ranges for T4 and T3 concentrations in sight-hounds compared to other breeds. Breeders should caution veterinarians to this fact when thyroid function testing is performed on sight hounds. The Irish Wolfhound had 3.7% of the samples positive for autoimmune thyroid disease. This is lower than the all breed average, but was not statistically significant. As sample numbers increase, statistical significance may be achieved. Although this under-representation is good news for the breed, they are not entirely free from the disease.

Breeders should strive to reduce the prevalence of autoimmune thyroiditis within the breed. Testing breeding animals for TgAA during their early reproductive years and breeding appropriately will help accomplish that objective. The assay can be performed on serum samples at most of the larger veterinary laboratories or on blood spots at Oxford Laboratories.

In conclusion, while there is no DNA based testing procedure at this time, testing with the best available marker, TgAA, can be beneficial. Selective breeding should reduce the prevalence in high incidence breeds and prevent an increasing prevalence in low incidence breeds. Although males were similar to females in prevalence, you can imagine the impact one important but affected male could have on the breed, especially a breed with small numbers. The TgAA portion of the thyroid profile is most important during the first 5 years of life as few dogs are found to have idiopathic hypothyroidism before this age. Since idiopathic hypothyroidism appears to be the end stage of autoimmune thyroiditis, the majority of hypothyroidism in dogs is a result of this inherited autoimmune disease. An increased focus on testing for autoimmune thyroiditis and selective breeding should help decrease the prevalence of canine hypothyroidism. In addition, knowing which are affected dogs within a pedigree will help to identify which dogs have a high probability of being carriers (ie. one affected gene if a single gene trait). 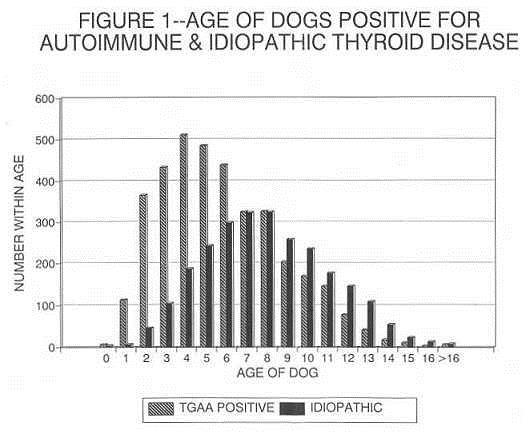 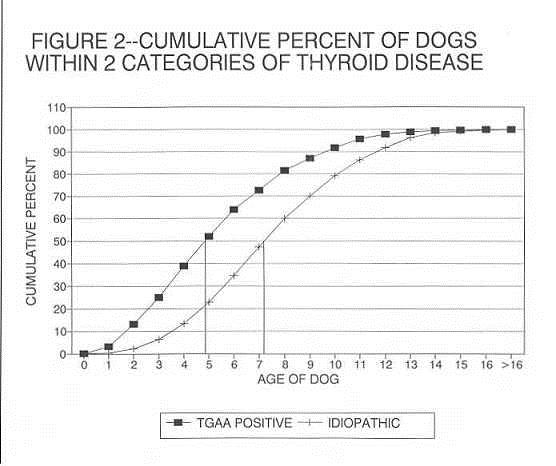 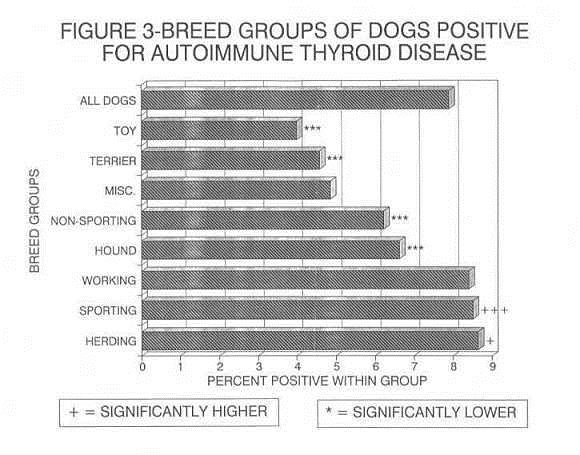