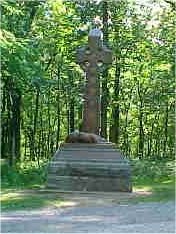 On July 2, 1888, one of the most distinctive memorials on the Gettysburg battlefield was dedicated on the twenty-fifth anniversary of the Irish Brigade fight in the Wheatfield.

One of the legendary units of the Civil War, the Irish Brigade was comprised of the 63rd, 69th, 88th New York Infantry regiments, the 28th Massachusetts and the 116th Pennsylvania. Thinned in the battles of Antietam and Fredericksburg, the three New York regiments could barely muster two companies each. But they were a unit to be reckoned with. From the monument:

"The brigade entered the battle under Command of Colonel Patrick Kelly 520 strong, of which this contingent composing three battalions of two companies each, numbered 240 men. The original strength of these battalions was 3000 men. The brigade participated with great credit to itself and the race it represented, in every battle of the Army of the Potomac in which the Second Corps was engaged, from Fair Oaks, July 1, 1862, to Appomattox Court House, April 9, 1865."

The Irish Brigade was the 2nd Corps, 1st Division, 2nd Brigade. It's New York Regiments were:

63rd New York Infantry commanded by Lt. Colonel Richard Bentley until he was wounded on July 2nd. Command was then by Captain Thomas Touhy. The 63rd brought 112 men to the field in two Companies (A and B). There were 5 killed, 10 wounded and 8 missing.

69th New York Infantry was commanded by Captain Richard Moroney until he was wounded on July 2. Lt. James Smith took command. The 69th brought 75 men to the field, companies (A and B) and lost 5 killed, 14 wounded and 6 missing.

88th New York Infantry was commanded by Captain Denis Francis Burke. It brought 126 men to the field in two Companies (A and B). It lost 7 killed, 17 wounded and 4 missing.

The artist, William R. O’Donovan, a former Confederate soldier who had fought at Gettysburg, was commissioned by the three New York regiments to create the memorial. He crafted a bronze and granite base supporting a carved Celtic cross with a life-sized Irish wolfhound lying at the base mourning its lost masters. The cross bears the trefoil corps badge of the Second Corps, in which the brigade served, as well as four medallions containing the numeric designations of the three NY regiments, and the seal of the State of New York. Beneath the medallions there is an additional bronze panel depicting numerous symbols of Ireland. Bronze plaques at the base of the cross provide brief histories of the regiments.

The inscription just below the front paws of the Wolfhound reads,

“This, in the matter of size and structure, truthfully represents the Irish wolf-hound, a dog which has been extinct for more than a hundred years.”
William Rudolph O'Donovan 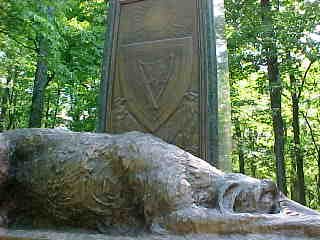 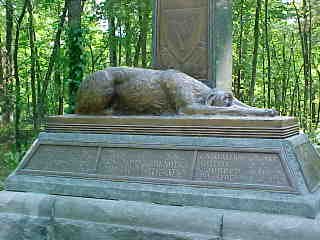 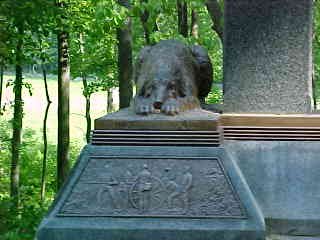