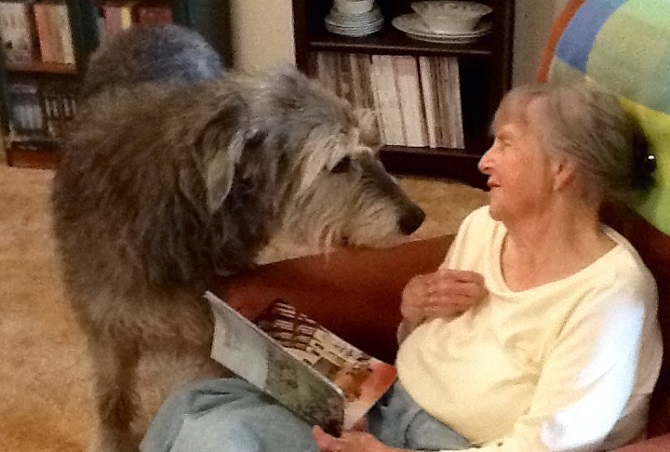 President, Birgitta Stolpe, announced the first recipient of this award during the Judges Dinner. From the nomination letter: “As a member of the wolfhound community for over sixty years, Lois has been a model and inspiration to others. She has a deserved reputation as a good sportsman, responsible breeder, and advocate for breeding to Graham’s vision of the IW. In her years as member of IWCA, Lois has demonstrated a significant and outstanding impact on the club and the Irish Wolfhound breed through her unstinting work to educate the wolfhound community as historian, chronicler, and the de facto conservator of Graham’s hound in America.

“Because of her extensive body of work for the benefit of the Irish Wolfhound breed and its owners … Lois J. Thomasson is a worthy recipient of the honor of receiving the inaugural Celeste Winans Hutton Award …”

On accepting the award, Lois wrote:

“One does not enter the world of Irish Wolfhounds seeking recognition; there is no need for accolades when the greatest reward of all is already to be had in the Hounds themselves.

“I was privileged to sit in on a number of occasions when Celeste Hutton and my mentor, Alma Starbuck, talked about the breed, and had the fun of watching Christel of Ambleside’s son, Greysarge Cristel’s Corrigan grow from awkward puppyhood to be the 1961 National Specialty winner, a win he repeated again the following year. I was happy to have known Celeste, for she was fun, a straight shooter, and devoted in her work for the humane treatment of all animals. I can think of few other mortals better to honor, and I thank you for this award in her name.

“Over sixty years ago I suggested to a young Sam Ewing that I would do the breeding and rear the puppies, and he could do the showing which he liked. Well, it never came to pass as we lived on opposite ends of the country, and Sam went on to do very well in both roles, but the paths that three new owners chose at the time took on a life of their own: Pat Huntley would record what we did, Sam would introduce the breed to the world in the show ring, and that left me to write on this wonderful creature that has come down to us from the ages.

“Fate has entrusted our hound to many hands since Captain Graham, and it is no more than its due that these hands be motivated by wise heads and loving hearts, so that the same may be said in another hundred years, or centuries to come. Thank you again.