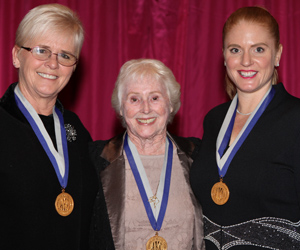 Limerick Irish Wolfhounds was established in 1972 when Janet acquired a 17-month-old Irish-import bitch, Roaree of Limerick. After completing her championship, that dog was bred one time and the Limerick foundation was established. Since then, Limerick has produced 16 litters, resulting in 111 puppies, including 50 finished champions. Twelve generations later, Roaree is still in every pedigree of the dogs presently residing at Limerick. As AKC Breeder of Merit program participants we have always challenged ourselves to breed the highest-quality dogs in as few litters as possible. The required health checks are an important part of our breeding decisions.

Ten different Limerick hounds have won 20 specialties among them, including Best of Breed at the 2003 National Specialty and Best of Opposite in 2005, 2009, and 2013 with a father, then his daughter, then her son. For five straight years beginning in 2002, Limerick had the nation's number one Irish Wolfhound in breed competition with four different dogs, as well as three different all-breed Best in Show winners, always owner-handled. Limerick has had several other number one Irish Wolfhounds, most recently in 2012. Ch. Taryn Tate of Limerick, SC, was the top-producing sire in 2007 and 2008.

Beyond the show ring and whelping box, we have served in specialty and all-breed clubs. Linda has been an AKC Delegate and national chair for judge's education, and this year was given the AKC Outstanding Sportsmanship Award by her parent club. Jamie is an AKC-approved judge for Irish Wolfhounds, Whippets and Junior Showmanship, Afghan Hounds, Salukis and Junior Showmanship.