How to Make a Tail Sling

This is an engineering solution. It is very helpful if one has some skill with a sewing machine, but the basic idea can be made with a pair of sweatpants, a shoestring, a pair of scissors and duct tape. 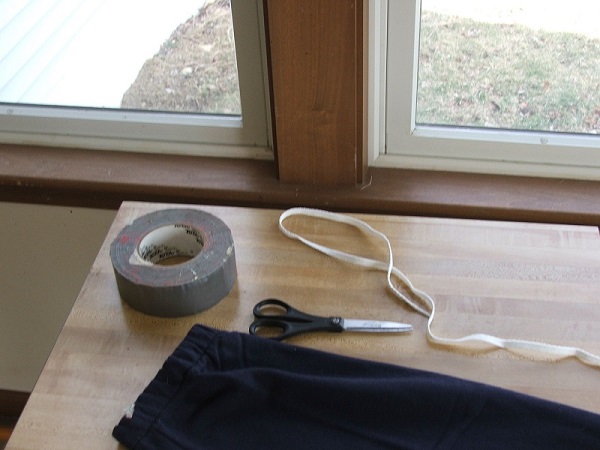 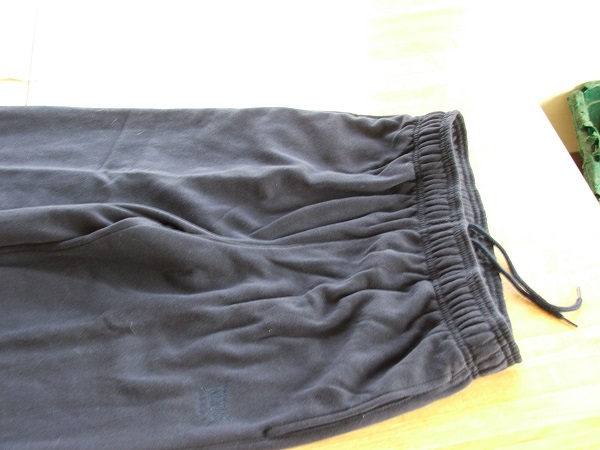 Figure 2. Having a drawstring at the waist simplifies fitting at the loin.

First the sweatpants should be large enough in the waist to fit around the loin (waist) of the hound. The type with a drawstring will be easier to use than those that have elastic only. It is preferable, but not necessary, to have the type that has an elastic band at the bottom of the legs. I find a men’s size small is about right for a large wolfhound. For a smaller dog children’s sizes may be better. 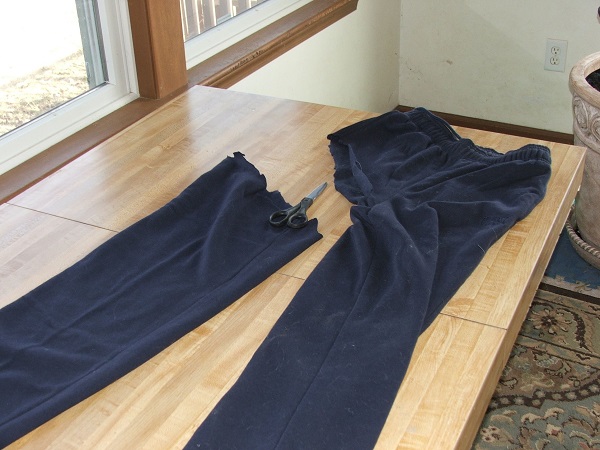 Figure 3. Cut the pants leg off at an angle. Don’t throw out that extra leg. It makes a great snood for ear injuries or for covering a laceration on the neck.

Scissors - these are for removing portions of the sweatpants. Cut off one leg at the top, leaving the waist band and the other leg.

At the bottom of the leg, gather the material and tie with the shoestring so that it will not slip off. This tie should be below the end of the tail so that the tail is free to move within the leg of the sweatpants. 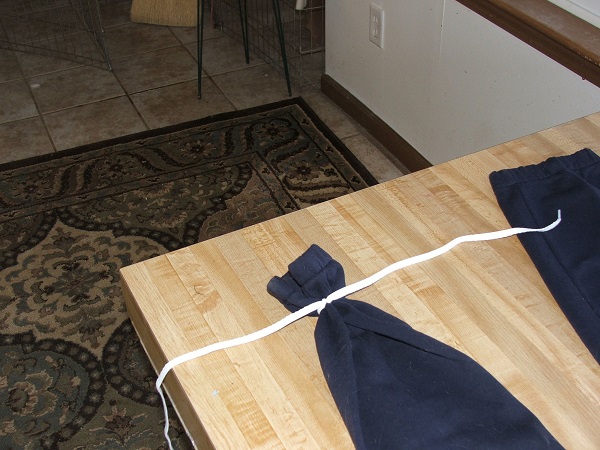 Put the hind legs through the resulting hole in the pants bringing the waistband up around the waist of the dog and slipping the tail into the remaining leg. Tighten the waistband around the loin area. With male dogs, I usually put a little cushioning under the waistband to reduce wear and tear. I also make sure the dog is able to urinate in front of the waistband. 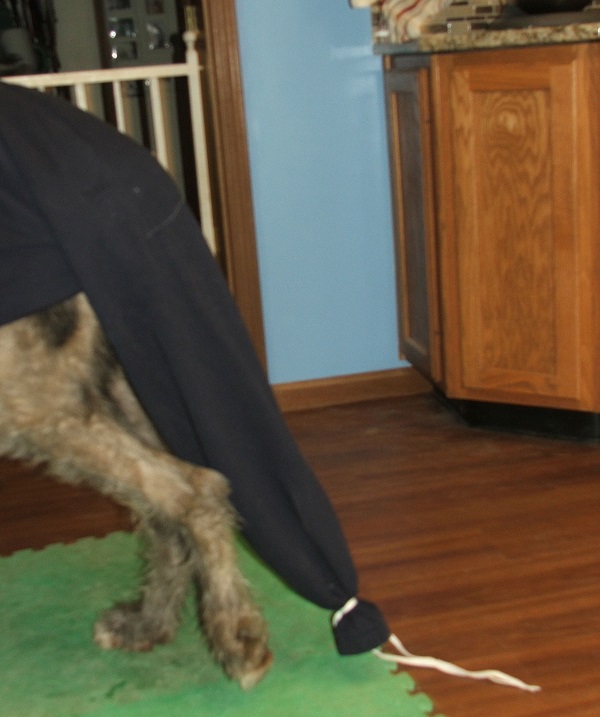 Figure 5. Pull the pants onto the dog, putting the two hind legs through the opening left by the cutaway leg and slipping the tail into the remaining leg. The tail is now loose inside the soft leg of the sweatpants.

At the top of the tail, wrap the fabric around the tail and wrap with duct tape or adhesive tape to trap the tail near the top of leg. Do not let the duct tape touch the dog. Note: If you are skilled with a sewing machine, you can take in the leg, making it nearer the diameter of the tail and sew a tie onto the leg near the top so that you can tie it around the tail instead of wrapping with tape. The important thing is to gather up the extra fabric so as to keep the wrap on the tail and clear of the anus. Nothing should be tight enough to impair circulation. If you cannot stick a couple of fingers between wrap and tail it is too tight. Additional wraps along the tail are sometimes helpful as well. 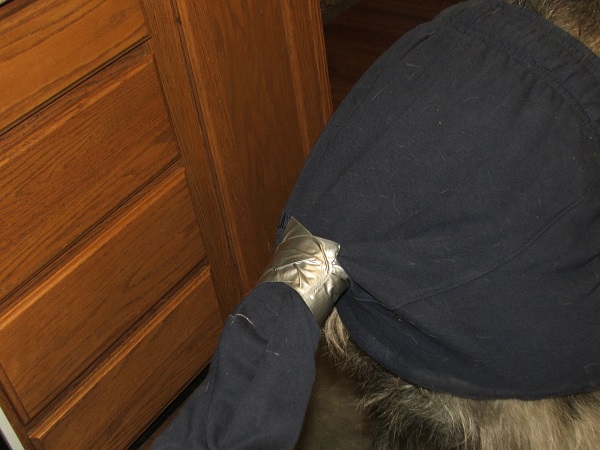 Figure 6. Duct tape around the top of the tail gathers the fabric to keep the anus clear. The duct tape should be loose enough to allow circulation and should be on top of cloth all around. Make sure no hair is trapped in the tape. 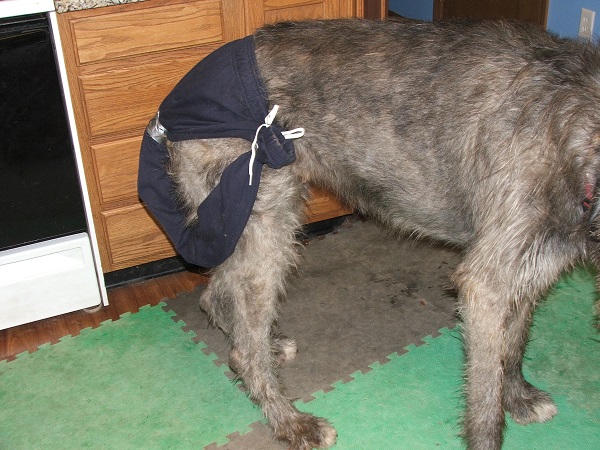 Figure 7. Tying the end of the sweatpant leg containing the tail to the waistband allows the dog to freely wag his tail but restricts contact with other surfaces.

Your dog is now free to wag his or her tail but the tail will not whip against obstacles and so will not be reinjured. Circulation is not impaired, and usually the dogs do not find this particularly annoying.

I have made many of these slings and keep several handy so that they can be changed and washed. I never travel without one, just in case a tail contacts something sharp or gets slammed in a car door.

Usually three to four days with the sling will allow a minor wound to heal. When healing more extensively damaged tails I may bandage them inside the sling. I try to keep the bandage as loose as possible so the dog doesn’t bother it, and I change the bandage at least twice a day. Simply by removing the shoestring, the end of the tail can be accessed through the lower end of the sweatpants leg.

With long term wear, I often pad the waistband and change the sling out frequently to prevent rug burn on the underside of the dog.

What can you do with a sewing machine? I have added padding to the waistband, incorporated Velcro to take the place of the duct tape, narrowed the leg to make it a little neater and hemmed the opening where the leg was cut out to make that cleaner. The basic design is still useful.