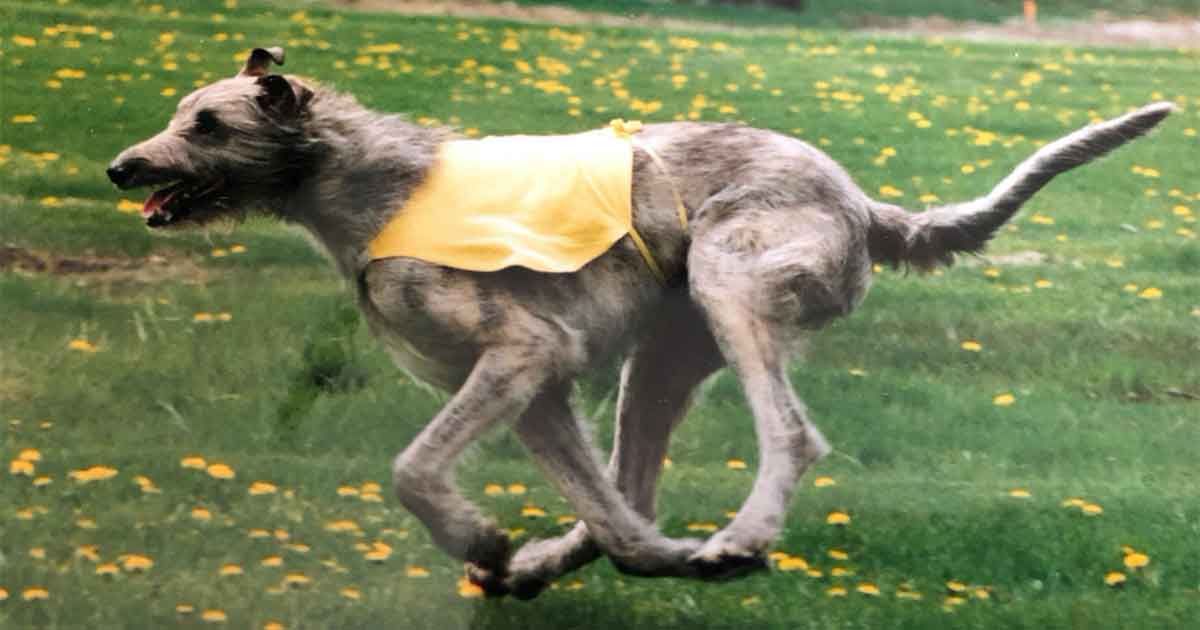 At the 2022 American Sighthound Field Association (ASFA) Annual Convention of Delegates, Stoneybrook Finn’s Mischief (Finnegan), owned by Karen Frederick and Michael Ferris and bred by Lynn and Judy Simon, was inducted into the ASFA Hall of Fame. Finnegan is the only male Irish Wolfhound to ever earn a Lure Courser of Merit 2 title (LCM 2). Below is the bio of Finnegan as written by his owner, Karen Frederick.

“The very first time Finnegan saw a plastic bag on a coursing field, he was five months old. I had seen a flyer for a coursing practice for a club forming locally. The field was set up in a park that was close to the Meramec River. We didn’t know any better and let this puppy run the entire practice course. The interesting part was that the 1993 Midwest Flood was just beginning to flood the field and this puppy ran through the water at the back of the course without an issue. The water was beginning to back up from the overflowing Mississippi River.

Finnegan began his relatively short lure coursing career at Crown Point, Indiana on 30 April 1994 - back in the days before certification runs were required. He was never the fastest Wolfhound on the fields but I doubt whether there were many that were more determined to catch that plastic bag and shred it. Finnegan competed for four years and was in the breed’s Top Twenty every year. What makes Finnegan different is that he was a dog in a breed when the bitches are more successful. Finnegan has been the only Irish Wolfhound dog to ever earn an LCM2 title. His last competitive run was at the 1998 International Invitational in Kentucky as he battled lymphoma. He retired as the #6 Lifetime Irish Wolfhound but has currently dropped back to #12.”